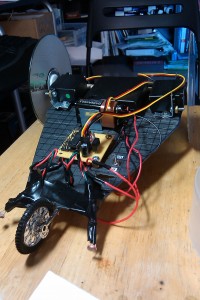 I couple of weeks ago I built a robot using the $50 Robot tutorial at Society of Robots. I want to thank the authors of the tutorial and the members at the forums for creating such a great resource for noobs like me. Building this robot was great fun, and I feel much more confident now about tackling simliar projects in the future. 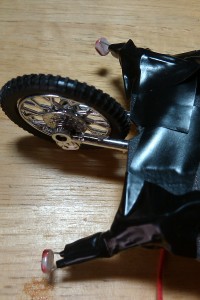 Here’s a close-up of one of the sensors: 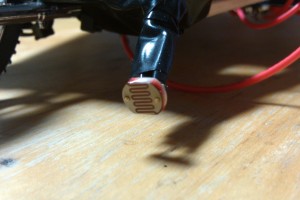 The wheels are powered by servos, which run off a set of 4 AA batteries. The board is powered by a 9V battery which is run through a 5V linear regulator to provide a steady 5V to the AT-Mega8 microcontroller. The tutorial suggests buying a battery holder with an on/off switch, which I did, but since I was using two separate power sources I decided to wire in my own on/off switch for the whole circuit. 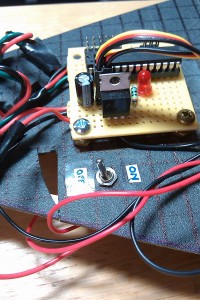 For the “chassis” I used an old, somewhat flexible plastic cutting board. It was convenient because I could cut it and poke holes into it easily. Since the plastic was so flimsy, I glued chopsticks on the bottom of the robot for support. I highly recommend buying a big pack of wooden chopsticks from the grocery store–it’s like the poor man’s balsa wood. 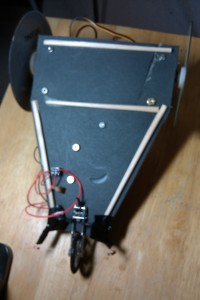 Here’s a video of the robot in action. As you can see, the wheels don’t always provide the best traction, but hey, it works!